Battle of the Branches

USO of Metropolitan New York (USO) will be hosting the second annual Battle of the Branches - a virtual half-marathon and 5K run/walk to benefit USO’s programs, services, and operations in New York, New Jersey, and Connecticut. USO of Metropolitan New York operates six USO centers in the tristate area which are invaluable resources for service members and their families offering rest, refreshment, and connectivity. The USO creates and maintains strong connections between service members and their families, homes and country, no matter where they serve. Throughout the COVID-19 pandemic, USO has supported thousands of service members deployed to the tristate area on critical public health missions including medical staff at hospitals, mass vaccination and testing sites, assembling test kits, and distributing food to communities in need.

In the spirit of friendly competition, we’re asking all participants to pick a team: Team Army, Team Marine Corps, Team Navy, Team Air Force, Team Space Force, or Team Coast Guard. Whether you’re a service member, veteran, family member, friend or supporter, you can choose a team and raise funds for the glory of that branch. The branch with the most participants will win bragging rights for a year!

Your half-marathon or 5K run/walk can take place any day from August 7 through 21. There is no fee to participate in the event, but we encourage you to create a fundraising page for your chosen team. Funds raised will support our programs, services and operations benefitting service members and their families in our area.

For more information, to register as a runner or walker, or to begin supporting as a fundraiser, select your team below:

Want to support, but you’re not sure which team to join?
That’s okay, you can donate to Battle of the Branches here: 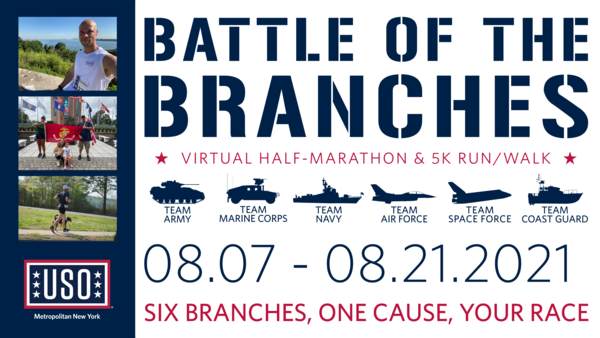